This wonderful cinema was created by Roger Gibson (still our Artistic Consultant & Festival Director today) at the Chichester College of Arts, Science & Technology as the ‘Chichester College Adult Education Film Society’ in September 1979. Films were shown on 16mm one evening a week for 24 weeks, plus a Saturday Junior Film Club. The first film shown by the Film Society was Woody Allen's “LOVE AND DEATH” on the 20th September.

One year later, Chichester’s last public cinema, the Granada (Corn Exchange Building housing NEXT at the moment), closed on the 9th August 1980. Leaving the city with little option when it came to a night out at the pictures.They screened ‘The Empire Strikes Back’ as their last film.

Over 40 films were shown over a 30 week season (Sep–May) following the success of the first season. Presentations were on Thursday evenings. Membership was limited to 300. Films were mainly in the 250 seat College Hall equipped with a 25 feet screen, whilst others were shown in the 70 seat Lecture Theatre.

In 1982, the society’s name was changed to the Chichester College Film Society. Right from the start, the society focused on World Cinema and Independent English speaking films, plus the odd box office hit. Retrospectives including five lost Hitchcock classics were shown.

The Chichester City Film Society, was awarded the “Film Society of the Year Award” in 1985, being the most enterprising film society in the Region, by Southern Arts.

The Chichester City Film Society moved to its present home in the New Park Community Centre at New Park Road. The New Park building dates from 1888, with the cinema housed in what was originally two classrooms with a sliding partition. Films were shown on Thursdays and Fridays only. Instant membership was now available on the door to anyone over 16 years.

In these early days, the seats were plastic on a level floor with a second hand projector that had its problems. When raked seating was introduced, at the end of each evening, it had to be moved back as far as possible with the loose seating moved away! The space was used by a Play Group each morning.

The National Federation of Film Societies acknowledged what had been done, and awarded the Chichester City Film Society - “Film Society of the Year”.


1992 - The Chichester Film Festival is Launched:

The first year of the Chichester International Film Festival (right). This initially was part of the City of Chichester Annual Festival. Directors, Actors, Writers and Critics visited and gave talks during the event. Over the years, many visitors have come to the Cinema including Sir Alec Guinness, Kathleen Turner, Ken Russell, Daniel Bruhl and Ralph Fiennes.

James (Jim) Stokes (Senior Projectionist) and Mark Bradshaw (Chief Projectionist) joined the team in 1997 and '98 respectively, and are today still the force behind our high quality sound & projection.

Trustee Mercia Last formed a “Friends of Chichester Cinema at New Park” with then intention of raising money for the cinema, which today has approximately 1,000 members.

In 2003 Artistic Director Roger Gibson received a Civic Award for his service to the Community and in October of that year, made an Honorary MA from Chichester University. Walter Francisco (our current General Manager) also joined the team in 2003.

New retractable seating was installed in '06 to replace the traditional blue theatre seats which had served us for years. June 2007 saw the installation of new Heating & Ventilation as well as the state of the art DTS Digital Sound. 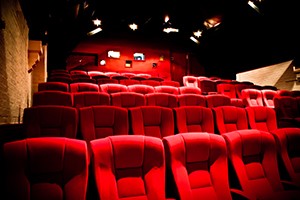 In early 2012, we decided to fundraise for a Digital Projector so as to be able to keep up with the quickly changing technology that seemed to be pushing the tried and tested 35mm format to the side. With the incredible help of our Cinema Friends, we raised the £60,000 needed to buy the necessary equipment in the space of less than 6 months. This money also led to the installation of our two satellite receivers and dishes, which allow us to screen Live Performance Events from anywhere in the world.

In the first week with our Digital Projector, we screened films from Italy, France, Lebanon, UK & US, keeping up our reputation as a cinema that screens the best in cinema from around the world. Our 120 seat Auditorium is currently equipped with a Digital server & Projector, Satellite Equipment, a Vic5 35mm projector, Digital Sound, large screen Video Projector, BluRay DVD player and a DigiBeta player.

In the summer of 2017 we installed some beautiful, and very comfortable, new cinema seating (pictured above). This was very well received by our audiences, who had never been so comfortable while watching the best cinema from around the world. We also took the opportunity to upgrade our heating and ventilation to a state of the art system, that handles the difficult task of controlling the temperature in this Victorian building that houses the cinema.

2019 was a huge year for Chichester Cinema at New Park, for it marked 40 years since Roger Gibson gave light to our unique independent cinema. To celebrate, we embarked on a year-long festival of film, including special one-off events, a 'Ruby Tuesday' film every fortnight at only £2 per person (the original ticket price in 1979), and a commemorative brochure. All contributing to a record year in admissions to Chichester Cinema at New Park, with just under 80,000 audience members, including receiving our 1,500,000th customer at New Park in July.

You can click on the image below for full details on our Ruby Anniversary celebrations.

A year when the world endured a serious coronavirus pandemic. For the safety of all, cinemas were closed in the UK and the rest of the world, and film releases were delayed, cancelled or moved directly on to streaming sites.

Chichester Cinema at New Park was open for screenings for only six weeks in the 14 month period from March 2020 to May 2021. We managed to remain strong and prepare the cinema for the safe return of our customers. This could not have been done without the support of the New Park Community Centre, our volunteers, staff, board of trustees, and of course you - our treasured supporters.

Throughout the lockdown periods, we took the opportunity to bring all our background operations up to a very high standard. We created a new role - Operations Manager - which was filled by Richard Warburton, the General Manager role was adjusted to Cinema Director & Programmer, and led by our Chair Debbie Ford and the Cinema Trustees, we made sure the governance of the cinema was up to the highest of standards.

What of the future?

The New Park Community Centre has survived the threat of demolition on at least three occasions, but has survived. We hope to build a second dedicated screen for the cinema, allowing us not only to screen films on the day of release, but to expand our Special Screenings (such as 'Baby Makes 2', 'Dementia Screenings' and more screenings with subtitles for the Hard of Hearing). With a dedicated team of staff, volunteers and Friends, we can keep one of the most unique cinemas in the country thriving !