Marc Forster | 2022 | 126 MINS
Sweden/USA
Tom Hanks is Otto, a grumpy widower who meets his match when a lively young family moves in next door. 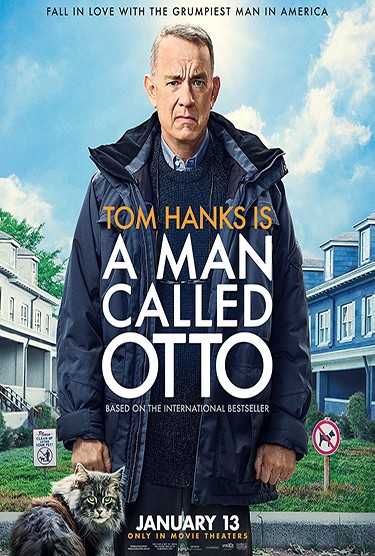 Based on the comical and moving New York Times bestseller, ‘A Man Called Otto’ tells the story of Otto Anderson, a grumpy widower whose only joy comes from criticizing and judging his exasperated neighbours.

When a young family moves in next door, he meets his match in quick-witted and very pregnant Marisol, leading to an unexpected friendship that will turn his world upside-down.

A funny, heart-warming story about how some families come from the most unexpected places.

You may remember the first big-screen adaptation of the book in 2015 – Sweden’s ‘A Man Called Ove’ – which also screened at New Park.

We hope we can do a little to help during these difficult times. Through our various charity initiatives (Cinema in a Box, Apuldram Centre screenings, Little People Big Screen, and PACSO screenings) we have helped to give back to the community.

Now, we are delighted to announce a run of FEEL-GOOD FRIDAY screenings.

In partnership with the New Park Centre, we will be putting on screenings on selected Friday mornings to include a free tea or coffee with your film ticket.

Charlotte Wells | TICKETS ON SALE SOON
Paul Mescal and newcomer Frankie Corio give astonishing performances as a father and daughter on holiday, in this moving and reflective debut from Charlotte Wells. One of the best UK films of the year!
FROM 3 Mar

The Banshees of Inisherin

Martin McDonagh | TICKETS ON SALE SOON
Back by Popular Demand Two lifelong friends find themselves at an impasse when one abruptly ends their relationship, with alarming consequences for both of them.