Anva’s wife, Yuriko, and two of his three children, Imy and Kenji, were joined by Imy’s partner Luke to perform a variety of pieces dear to Anva’s heart on piano and cello. Unfortunately Anva’s daughter Maria could not be present due to the dreaded Covid-19.

The full house were left in awe at the talent of the family, very much inspired by the extraordinary Anva Luc. You can read his obituary below to get an idea of how inspirational this man truly was.

Pieces played included works from Schumann, Debussy, Ravel and Rachmaninov, with the latter’s ‘Vocalise’, performed by Imy on piano and Kenji on cello, stunning the audience with its passion and technique. Click the image below to view a video of the final piece played (‘Evergreen’ by Barbara Streisand below) – the full programme is listed further down. 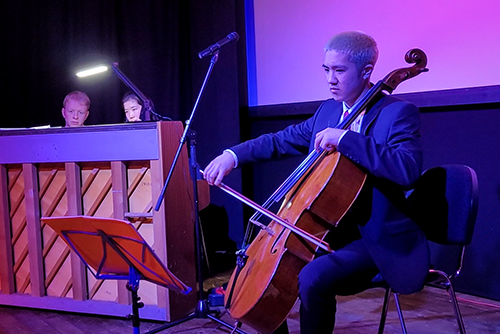 The musical programme was followed by a moving short documentary film – The Journey of the Piano Tuner (2007) – by Danny Weinstein. In the short, we witness Anva Luc going about his daily life tuning pianos, swimming, gardening and so much more. It was an emotional end to a wonderful night of music and memories. All proceeds from the event will be donated to local charity Talking News, of which Anva was a dedicated listener.

Programme – A Tribute to Anva Luc

Imy Luc (Piano solo)
Daisies (solo piano transcription of the original song for voice and piano) (1916) by Sergei Rachmaninov
‘My Favourite things’ from The Sound of Music, arranged for solo piano by Stephen Hough

Popular Chichester piano tuner and repairer Anva Luc – father to a unique musical family – has died at the age of 60. He “lit the hearts of many.” Anva, who tragically lost his sight in his native Vietnam when he was only seven years old, will be remembered as a dedicated father and husband, skilled piano tuner and repairer, avid gardener, charismatic speaker, and an inspiration for many. Anva is survived by his wife Yuriko and by his children Imy, Maria and Kenji who are all musicians.

Anva was born in a rural village near Hai Duong, North Vietnam, the second eldest of five children and spoke a rare dialect (Ngai) with his parents. Anva’s rural life in North Vietnam was simple and tranquil, where there was a very close-knit community. He has many fond memories of his homeland. He worked closely with the natural world and always wanted to be involved in as many activities as he could. Anva was full of energy and very sociable, he would go swimming in the river, climb hills, look after the water buffalos, and played lots of games. Life for the children in the village was peaceful and fun. However, the tranquil and peaceful state of the country became no more when the war between North and South Vietnam intensified, and the Americans started to drop bombs in North Vietnam. A bomb took Anva’s eyesight at the tender age of 7. Due to the worsening prospects of staying in Vietnam, Anva’s grandma, father, and siblings made a perilous journey as part of the ‘boat people’ that travelled to Hong Kong. From there they made their way to a U.K. refugee camp in Thorney Island. Anva picked up English very quickly. Staff at the camp were impressed with his sense of humour and friendly outgoing nature. The family obtained a council house in Hampstead Heath, London. The Royal Society of the Blind was contacted, and it was agreed that he should learn the necessary skills to become independent.

His acute hearing and learning ability resulted in a proposal that Anva should apply to an establishment for Piano Tuner’s training. This opportunity appealed to Anva and his family and he was offered a place. Anva attended The Royal National College of the Blind Hereford, where he studied piano tuning from 1983-1986. He passed with flying colours. The course required a huge amount of hard work and talent and only 50 percent of the students enrolled were able to complete the course. Anva subsequently became the local piano tuner of Chichester and received a flat from the council. He used to tune all the schools in the area alongside Chichester Festival Theatre, Seaford College etc. He had a guide dog named Milo who helped him navigate the city. Anva travelled around with Milo, going swimming, and exploring new places together. They became a familiar sight in the city.

Anva was becoming a shrewd businessman and purchased his own house. During this time, Anva met Yuriko in 1992 at Bishop Palace Gardens whilst she was studying English at Chichester College. They became engaged in Japan and subsequently married in St Paul’s Church in 1993. Imy was born in 1994, Maria in 1996 and Kenji in 2001. Anva made the family’s life very fun. He was a humorous guy, always with a joke up his sleeve and the family were always laughing a lot. He taught the necessary skills to his children with vigour and encouragement. There are many fond memories of days out, active holidays, playing board games etc. He had an excellent memory and general knowledge due to his keen interest in history, current affairs, and the natural world. His curiosity on any topic meant he could relate to anyone he met.Anva was a very generous man dedicated to the community of Chichester and lit the hearts of many. As well as being the local piano tuner he raised a lot of money for various charities through his fitness. These include participating in the Bognor Birdman, Brighton Tandem Bike Ride and swimming the length of the channel.

The proceeds from this concert will go to Talking News, a charity that Anva benefited from for many years. The charity brings local news to blind and partially-sighted people through audio recordings.

The Luc family would like to thank New Park Cinema, Cinema Director Walter Francisco, and film director Danny Weinstein, for this opportunity to celebrate Anva’s rich and colourful life through film and music.