Todd Field | 2022 | 158 MINS
USA
Cate Blanchett is utterly magnetic as an imperious maestro in this ultra-stylish drama with a shocking climax. Winner of the 2023 Golden Globe for Best Actress 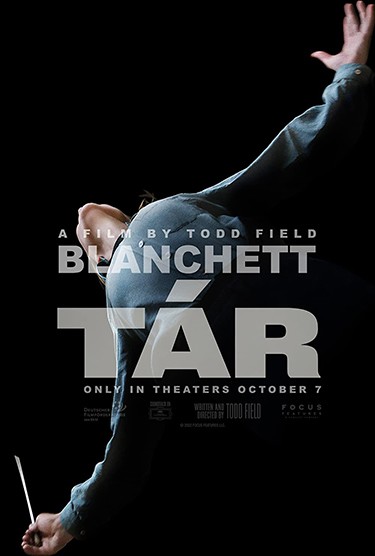 We meet Tár at the height of her career, as she's preparing both a book launch and much-anticipated live performance of Mahler's Fifth Symphony. Over the ensuing weeks her life begins to unravel in a singularly modern way.

The result is a searing examination of power, and its impact and durability in today's society. An engrossing piece of cinema, even thrilling, that keeps us wrapped around its finger for a two-and-a-half-hour-plus running time that flies by.

A MESSAGE ABOUT TÁR FROM ROGER GIBSON:
"From the films that I saw premiered in last year's Festivals (Berlinale, Cannes, Karlovy-Vary, Venice) and have managed to get a UK release, the titles I was very impressed with, included 'Triangle of Sadness', 'Close', 'No Bears', 'My Neighbour Adolf', 'Blonde', 'Living', 'The Banshees of Inisherin', 'EO', 'Corsage', 'Aftersun', 'Lynch/Oz' - all shown here at New Park.
How many of those did you see?
However my favourite film of all these Festival premieres was undoubtable TÁR with a stunning performance by Cate Blanchett, with all aspects of it superbly researched and appeared so accurate that I thought at first I was seeing an actual biopic (world premiere in September at Venice - with no reviews).
So a personal recommendation - not to be missed!

Charlotte Wells | TICKETS ON SALE SOON
Paul Mescal and newcomer Frankie Corio give astonishing performances as a father and daughter on holiday, in this moving and reflective debut from Charlotte Wells. One of the best UK films of the year!
FROM 3 Mar

Park Chan Wook | TICKETS ON SALE SOON
Park Chan Wook’s (‘The Handmaiden’, ‘Oldboy’) tale of a married detective torn between infidelity and moral duty keeps the viewer off-balance at every turn in this black-widow noir. Please note that the dates and times in the printed brochure are incorrect.